Greens and Greys
by Rosalie Sugrue

“Rosalie Sugrue draws on her personal knowledge of people and places and weaves this into the fictional story of Molly Sinclair. As Molly’s thoughts and observations come tumbling out, the story reads rather like a diary. In other ways, however, it is a thought-provoking critique of social values and narrow-mindedness.

Molly has grown up on the West Coast in a secure and loving home. She knows the behaviour expected of her. In addition to her parents she has her church and Girl Guides as moral mentors. Nevertheless she is not wholly insulated. She is sexually harassed by an older man. Her brother is gay and, although never spoken of at home, this leaves unanswered questions in her mind. Later she has to face the incomprehensible suicide of her father. When Molly is diagnosed with a depressive illness readers are allowed a glimpse of historic conditions in a psychiatric hospital.

Moving to Christchurch as a student Molly is conscious of the values she brings with her. While she has a new freedom and is able to talk about sex and romance with her friends, she is also constrained by the rules and expectations of a church-run student hostel. New horizons unfold when she moves to teach in a small town. There is security in flatting with friends with whom she has shared student hostel life.

Eventually Molly embarks on her planned OE. She travels to England and Europe. Far from the constraints of home Molly is introduced to alcohol and sex. She finds romance but also experiences sexual abuse at the hands of an adult whom she believed wanted to help her. At one point fearing the consequences of pregnancy Molly considers suiciding. Returning to New Zealand she marries and raises four children. More confident in herself Molly embraces a feminist perspective and recognises how culture impacts on faith and ethics.

With imagination and insight the author shares acute observations on life as seen through the eyes of Molly Sinclair. Those who grew up in the 1960s and who are aware of how much attitudes have changed since then will feel they are on a journey with a fellow traveller. The story also recalls advertising jingles, jokes, sayings, songs and experiences almost lost in the mists of memory. The story depicts not just the colour of the landscape but the grey of confusion always washed with the green of hope.” 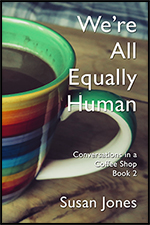