Now in Stock!
Order your copies 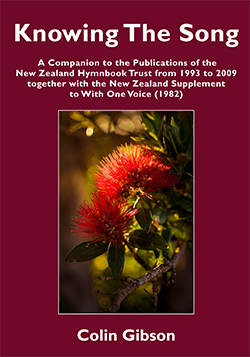 Published:  August 2021
in association with the NZ Hymnbook Trust

**See https://pgpl.co.nz/shipping-orders
for information about ordering and payment options, and our current postage charges.

For deliveries to Rural Delivery addresses an additional fee applies.
Please click the button below to add this cost to your shopping cart

You may find it is cheaper to order print copies from your local Amazon store, to avoid the high cost of postage from New Zealand.

The New Zealand Hymnbook Trust has worked faithfully to make the best contemporary, local hymns available to churches and choirs in our country.

Their key music books are all still popular and remain in print today. Colin Gibson tells the stories of how the hymns in these books came to be written and of the tunes to which they have been set, alongside biographies of the hymnwriters & composers.

Praise for Knowing the Song

“…what a treasure trove of information it is. Thank you for all the detailed and scholarly work you have put into this amazing book. I love learning more about the songwriters and wordsmiths who have contributed to the rich taonga that is New Zealand hymn writing. Great too to learn the stories behind the songs and so very moving at times.…”  FM

“Congratulations on producing such a comprehensive book re NZ hymnody and hymnody in general. It’s breathtaking in its coverage and will be a great source of information and a delight to read.…” BB

“What a treasure it is! …The expressive cover photo is a tribute to all the records of words, tunes, writers and composers and other detailed information that makes the book such a great treasure.” NW & GW

“As one of the groups that asked you about the publication of the background to hymns you have written and having been assured that it was a work in progress, we were delighted to receive notification that Knowing the Song had been published.

Thank you so much for making your knowledge and research available to all who would access it.

Of course, the contents cover a much wider field than your personal considerable contribution.

Each time we are now selecting hymns from the NZHT collections, it is standard practice to open this wonderful publication.

On behalf of the Worship Committee of our church and the whole congregation, thank you again. Nga mihi me nga manaakitanga.”  GK

“…I have been buried in the pages of your compendium. It is simply magnificent in and will afford many hours of pleasure to a multitude. It must have been a labour of love and reflects the accomplishment of hymn writers from a small nation often forgotten. It must be satisfying to see this through the press. I salute the publication of this handsome volume which does justice to a surprising vitality and dynamic trend within the kiwi church. with deep appreciation” TW

“My dictionary has two meanings for ‘know’ or ‘knowing’. Both describe aspects of this book.

First, ‘know’ means ‘to be aware through observation, inquiry or information’.  The ‘information’ on the hymns comes in two parts. Colin Gibson first tells the stories of how 506 hymns came to be written. The four books of New Zealand hymns: Alleluia Aotearoa (1993), Carol our Christmas (1996), Faith Forever Singing (2000), Hope is our Song (2009) and a further 54 hymns in The New Zealand Supplement to With One Voice (1982). The ‘information’ includes biographies of hymnwriters, the contexts (time, place, and culture), and the meanings/theologies. The second part describes the tune, how melody and rhythm convey the heart or feelings of the texts. The hymns are set out in alphabetical order, two columns per page. While the texts are not given, Colin’s story of each hymn, written as if in conversation with the reader, fully engages us with both subject matter and spirit.  In the final pages there are 3 Appendices and 3 Indices, including the history of the NZ Hymnbook Trust, hymn titles and tunes, Scripture sources, information on writings about the hymns and international publication of NZ hymns.

Second, ‘know’ means ‘to develop a relationship through meeting and spending time with someone or something’ leading to a deeper friendship. Knowing Colin, I believe he chose ‘knowing’ rather than ‘learning’ for the connotations of humanness, humanity, even humour, in the imagery of ‘knowing’.  What lucky people they are who discover treasures/taonga of a kiwi theology in word and music in the hymnody of Aotearoa New Zealand.  As the cover blurb writes: ‘Ministers, preachers, worship leaders, church musicians and choir members will find a wealth of material in the Companion to entertain and inform them, and to share with their congregations’.  I like the word ‘entertain’ (my italics).  Let’s show from our church singing that we enjoy our worship!

New Zealanders can be proud of gifts Colin Gibson has given this land and our people.  A former Professor of English at the University of Otago, his skills combine literary research and teaching and music composition in hymn, choral and symphonic forms. Colin has led workshops and lecture series on hymns throughout New Zealand and in Australia, America, England, Japan and the Philippines.  He was a founding member of the New Zealand Hymnbook Trust and member of its Editorial Group. In 1981 he established in the Dunedin Public Library a national research collection of hymn books and study material. In 2002 he was awarded the New Zealand Order of Merit for services to literature and music.

A special thank you to Philip Garside, who has produced an attractive publication with easily readable text size and layout. At $50.00 retail, this is a bargain. Every church, school and city library should have a copy!” John Thornley

“It is good to know about the hymns we sing, who wrote them and why, and why a particular tune has been chosen to convey the mood of the words. Colin Gibson tells us this and far more in Knowing the Song.

Driven by a concern for hymns written in contemporary and inclusive language and using relevant imagery, the New Zealand Hymnbook Trust (NZHBT) published Alleluia Aotearoa (1993), Carol our Christmas (1996), Faith Forever Singing (2000) and Hope is our Song (2009). New tunes were composed for the words. Prior to this, as a first step along the way, NZHBT selected contemporary ecumenical and Maori/Pasifika hymns to be added to the Australian Hymn Book (AHB 1977). With this supplement of 54 hymns the AHB was published in New Zealand under the title With One Voice (1982). Knowing the Song was written to be read alongside these five NZHBT publications.

In Knowing the Song, hymn writer and composer Colin Gibson has done a sterling job in presenting his profound knowledge of New Zealand hymns in an accessible and readable way.

In a major section titled The Hymns, all of the NZHBT hymns are listed in alphabetical order of their first line. Wherever possible the sources of the text and tune, the occasion for which it was written or what inspired it and its earliest appearances in print are identified. The metre is stated, and readers may easily locate the hymn by a system of clearly-explained abbreviations. For example, Look in wonder H93 means that the hymn is no. 93 in Hope is our Song.

The next major section is titled The People and contains comprehensive biographical details for each writer, composer and arranger of hymns in NZHBT publications. Following each entry, the hymns with which that person is associated are listed in bold type.

There are three appendices: a comprehensive list of publications of New Zealand hymns, publications where writing about New Zealand hymns and hymn writers is to be found, and the history of NZHBT. There are also three indexes: hymn names and first lines, scripture references and an alphabetical list of tunes. The scripture index indicates the page number in The Hymns section where the reference is found. This is very useful for anyone wanting to link a particular hymn with scripture being read in worship.

Free-flowing and easy to read, Knowing the Song deserves to be the constant companion of all worship leaders and church musicians. It will be of immeasurable help to those seeking to choose hymns for particular themes in worship and to church musicians wanting to know more about the tunes they play. If the information is summarised and introduced by worship leaders and musical directors, it will enable New Zealand congregations and choirs to understand more about the content, mood and theology of the hymns they sing, thus enriching and increasing the enjoyment of singing in worship. Using the book in this way will be a tribute to Colin Gibson’s meticulous research and commitment to New Zealand hymns.”

Starting with the New Zealand Supplement to With One Voice in 1982, the New Zealand Hymnbook Trust has worked faithfully to make the best contemporary, local hymns available to churches and choirs in our country.

In this Companion, world-renowned New Zealand hymn composer, Colin Gibson, tells the stories of how the hymns in these books came to be written and of the tunes to which they have been set, alongside biographies of the hymnwriters and composers.

Ministers, preachers, worship leaders, church musicians and choir members will find a wealth of material in the Companion to entertain and inform them, and to share with their congregations.

For ease of reference the Companion includes indexes of Hymn Names and First Lines, Scripture sources and Tune Names.

For the first time, Gibson has compiled a Finding List of New Zealand Hymn Writing which records the many hymnbooks and other publications that hymns by New Zealand composers have appeared in, both in this country and overseas. Other appendices include a list of publications in which our hymnwriters and hymns are discussed, and a brief history of the Hymnbook Trust. 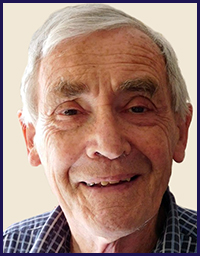 Colin Gibson, a former Professor of English at the University of Otago, has been involved with music from his childhood. The Mornington Methodist Church in Dunedin has been his spiritual home for more than 80 years. He has been the church’s Choir Director, organist, and pianist for the last 60 years.

In 1972 he took a national prize with his now famous hymn, He Came Singing Love, and he has been busy ever since, writing hymn texts and composing hymn settings for his own hymns as well as for many other New Zealand and international hymnwriters.

He has led workshops and lecture series on hymn-related topics throughout New Zealand and in Australia, America, England, Japan and the Philippines. A founding member of the New Zealand Hymn Book Trust and its editorial group, in 1981 he established at the Dunedin Public Library a national research collection of hymn books and study material.

In 2002 he was awarded the New Zealand Order of Merit for services to literature and music.

Colin is married to Jeanette, a former teacher of the deaf.  They have three professional children.