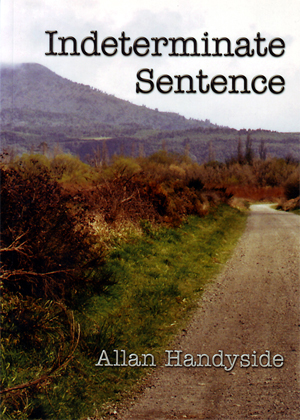 Rest of the World Customers
NZ$53.71 including airmail postage

**See https://pgpl.co.nz/shipping-orders
for information about ordering and payment options, and our current postage charges.
For deliveries to Rural Delivery addresses an additional fee applies.
Please click the button below to add this cost to your shopping cart

Also now available as an eBook:
Click here for details

This book captures a piece of New Zealand history that is not well known. The small group of people described in it had a strong influence on the thinking of others as New Zealanders later grappled with the issues raised by the Vietnam War in the late 1960s and the nuclear ships issue more recently.

Allan Handyside spent nearly four years in Rangipo Prison, in the central North Island, from 1942–46, for refusing to join the armed forces in World War II. He had already been in Mt Crawford prison, Wi Tako Prison near Trentham and Strathmore Detention Camp near Taupo.

The Christian Pacifist Society in New Zealand reached its peak in the 1930s. Many of its most prominent members were, like Handyside, Methodists and there was a strong pacifist following in some sections of that church.

During World War II, New Zealand politicians were much less tolerant of pacifist sentiment and conscientious objectors than those in Britain and other similar countries. As a consequence, around 800 NZ COs were detained, either in specially built remote camps or in prisons, for “the duration of the war.” Their usual human rights were suspended and they received an indeterminate sentence. COs were only released well after the end of hostilities and after troops had arrived back home.

Handyside recalls, that in contrast to other camps, Rangipo prison officers never had a friendly word for the prisoners, never treated them as human beings. Discipline was harsh, with solitary confinement on a bread and water diet a common punishment.

Yet there was also humour and comradeship among the prisoners. Some were encouraged to plan and attempt escapes to help them stay sane. Authorities never discovered the secret mailrun between Hautu Detention Camp and Rangipo Prison that enabled those at Rangipo to get news of the outside world.

After the drab conditions of Rangipo, on release Handyside found the shock of colours of flowers and the music of playing children’s voices overwhelming.

The impact of this experience, the disruption caused to his relationship with his parents and his continuing commitment to the peace movement were apparent throughout the rest of his life.

This book helps us to understand how a minority group of pacifists maintained their integrity, and emerged from the wartime experience to return to their normal lives, where they continued to promote beliefs that are as relevant today.