A Question of Faith:  A History of the New Zealand Christian Pacifist Society 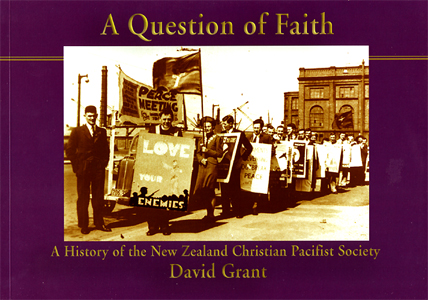 Rest of the World Customers
NZ$40.67 including airmail postage

See https://pgpl.co.nz/shipping-orders
for information about ordering and payment options, and our current postage charges.
For deliveries to Rural Delivery addresses an additional fee applies.
Please click the button below to add this cost to your shopping cart

Also now available as an eBook:
Click here for details

In March 1936, Wellington Methodist Minister Ormond Burton and his circuit steward A C Barrington established the Christian Pacifist Society of New Zealand open only to adult communicant members of mainstream churches. This represented both the culmination of a long period of burgeoning pacifist sentiment within the Methodist Church and in particular, its Bible Class, and the beginning of New Zealand’s most assertive pacifist movement both before and, as much as it was possible, during World War II.

Christian pacifists opposed all war, at all times irrespective of political developments. They shared a fundamental and absolutist belief, based on the teachings of Jesus Christ, that war was a moral and ethical sin in God’s eyes.

Their beliefs led many members to publicly protest against World War II for which some were jailed, to become conscientious objectors and suffer detention in camps for indeterminate sentences and after the war to establish a community at Riverside near Motueka.

David Grant, New Zealand’s foremost author on this topic, draws on his personal interviews with members from the 1980s onwards and other research to tell the stories of these committed men and women, and of the organisation they formed. The book includes 30 photographs from the author’s collection, several of which are published here for the first time.

David Grant is a professional historian based in Wellington. This is his eighth publication. He became a full time, free-lance writer in 1990, partly because of the pleasure he experienced in researching and writing Out In The Cold: Pacifists and Conscientious Objectors in New Zealand During World War II (Auckland 1986), and the post-graduate university work that preceded it.

Order Seasons of the Spirit 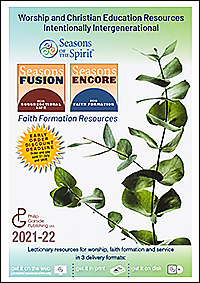 Order Seasons of the Spirit for Year C by 31 July 2021 and receive the 10% early order discount. Available in print, CD ROM and now USB stick.